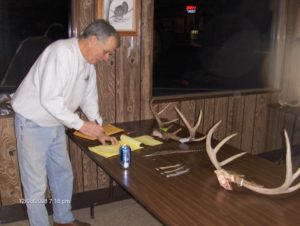 The Club held it’s annual game contest in conjunction with the December Annual Meeting again this year.  Our normal judge, Bob Amundson, was unable to fulfill his duties this year.  Thank you to Andy Arbs for stepping in to help out.

The winners of the Eau Claire Rod and Gun Game Contest and bragging rights for the year are:

Pheasant and Turkey had no entries this year.  That’s a shame.  If I had known that, I think I had a pheasant tail feather somewhere in the truck that I could have entered.  Also, there were no youth entries either.  Something to work on for next year.

Thank you all for coming out and spending a few hours with your fellow members that night.  It was nice to see some friends after a few months away.  It was also nice to see a little interest in the Foundation as well.

Remember that starting December 18th, Dan will be opening the club house up in the evenings.  Come on out and have a beverage, shake some dice, play some cards, catch up with your friends and teammates, or just get out of the house.