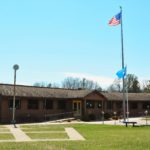 So, since we can’t have anyone come and check out the updates we have made to the club house interior, we might as well post some pictures.

Last year we updated a couple of the league scoreboards to new digital monitors.  This year, we have expanded that project and we now have a monitor for each league board.  We also decided that while we were doing this, a few upgrades to the wall were needed in order to accommodate the extra weight and to get some more plugins for all the monitors and controllers.  Since we were tearing into the wall anyway, we decided to do a few updates and lighten up the room a little bit. 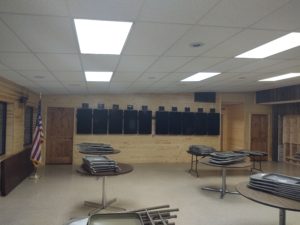 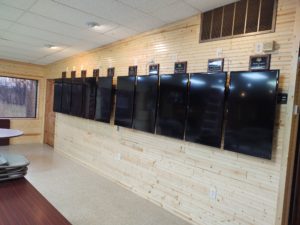 So, once we started with this project, it went so well and the materials turned out to be a little less expensive than we thought, we decided to take it a bit further. 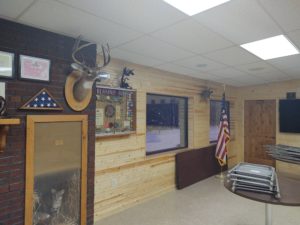 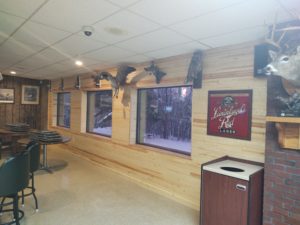 Also, you can see that the bathroom doors have been replaced, as have the ones to the utility closets.  Big thanks to the guys for all the hard work.  Especially Bill, who would like everyone to know that he absolutely loves the smell of poly coating.  He might have been kidding, but we all think that he is really coming around to it.

Another couple of updates that you might notice when we are able to open the clubhouse back up again are the removal of the old smoke eaters from the ceilings.  Of course when we did this, we noticed a number of the ceiling tiles were yellowed and needed to be replaced.

Also, with the help from Mike Johnson, we replaced all the fluorescent lights with new LED panel lights.  With the new lights and lighter walls, the interior of the club house looks much brighter.

When you walk into the club house, we had a carpeted mat down in front of the doors.  Partly to collect dirt as people walked through the door, but it was also to cover up a few tiles that had become broken and worn.  We replaced those tiles with some new tiling and carpet that should last for some time. 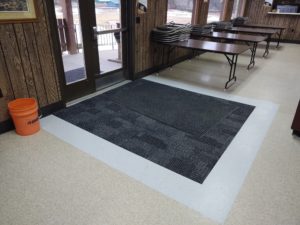 The tiles in the trap room were also showing wear and needed to be replaced.  There we decided to tile to entire room.

The orange circle is going to be a clay target.  We are looking into getting a decal made for it to make it look more like a target and put the Club logo in the middle.

There has been a lot going on over the winter and we had hoped to be able to have had the members there enjoying the club house by now, but we could not have anticipated such a wild start to 2020.

We are working on plans to get the trap range open, so please watch for more updates.

Stay safe, stay healthy and we hope to see everyone out at the range very soon.

There are no upcoming events.